Antelope Canyon made it to my “to go” list last year when I saw photos of it.  I went to see it with uncle Fong who was visiting from Toronto.  We stayed in Page for one night in order to see both the upper and lower canyon because it’s a 4 hour drive from Arizona. 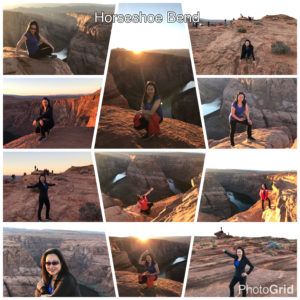 On day one we got to see the amazing sunset on the famous Horseshoe Bend.  Then on day 2, we joined a tour for the Lower Canyon at 9am followed by a tour of the Upper Canyon at noon.  It was quite a different experience: the Lower Canyon has more colors and has more adventurous hikes and climbs of the stairs.  In contrast, we were driven up to the Upper Canyon so it was just an easy flat hike.  Both tours were an hour long only.  We ended our trip with a boat tour which gives a total different view of the canyon. 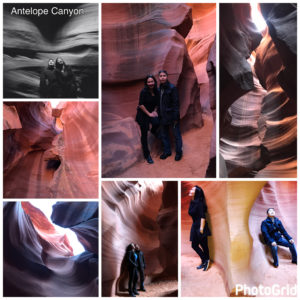 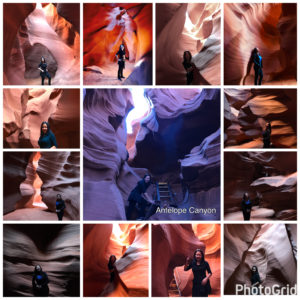 Even though the Grand Canyon was way bigger but I was more impressed with Antelope Canyon because of the colours and shapes of the rocks.

Here’s what Wikipedia says about this place:  “Antelope Canyon was formed by erosion of Navajo Sandstone,[2] primarily due to flash flooding and secondarily due to other sub-aerial processes. Rainwater, especially during monsoon season, runs into the extensive basin above the slot canyon sections, picking up speed and sand as it rushes into the narrow passageways. Over time the passageways eroded away, making the corridors deeper and smoothing hard edges in such a way as to form characteristic ‘flowing’ shapes in the rock.[3]

Antelope Canyon is a popular location for photographers and sightseers, and a source of tourism business for the Navajo Nation. Private tour companies have been permitted to offer tours since 1987. It has been accessible by tour only since 1997, when the Navajo Tribe made it a Navajo Tribal Park. Photography within the canyons is difficult due to the wide exposure range (often 10 EV or more) made by light reflecting off the canyon walls.[5]