After having travelled 16,433 km in over a 32 hours trip, I felt so warm to meet my 2 local friends, (Deon and Stephanie), for the first time at the airport.  They made me feel so welcomed to be waiting for me with biltong (beef jerky) and a bunch beautiful flowers (SA national flower, Proteas).

This is not only my first trip to Africa but also my first solo trip and but for sure, it won’t be the last on both counts.  I now understand and agree with what those single traveler’s mean when they say it’s very liberating to be traveling alone since you don’t need to co-ordinate with someone about where to go, when and what to eat.  But more importantly, I was able to see this country through fresh local eyes.  I saw a different perspective of the world where I can freely experience and grow from it.  But the down side is I felt totally lonely and miserable while I was sick in Kynsna and there was no one around to give me any TLC.  For this reason, I especially miss my old travel buddy who was supposed to have come to Africa for a 3 month trip with me this time.  Since it turned out to be a solo trip, I reduced it down to 1 month only. I hope to find other travel buddies in the near future as I still have another 57 countries on my bucket list to visit!  And I really don’t see myself doing solo trips to all these 57 countries.

Besides being sick and alone, I was also quite disappointed in the fact that Cape Town is not as different as I had expected. I had envisioned a very “African” place and environment. But they have everything such as hot yoga, gym, Uber, Groupons, international cuisines, chain stores, etc just like in North America.  After leaving Cape Town, I very soon learned that the Cape Town is known to be a very westernized place unlike the most other cities in Africa.

South Africa is one of the 54 countries in Africa with a population of 53 million.  Cape Town is located in the Western Cape, which is one of the 9 provinces in South Africa.  It has 3.74 million people and ranks second among the most populous urban areas in South Africa after Johannesburg.  Cape Town is a city of people who are from different parts of the world, the word “diversity” in the context of this city and is known to be “home for all”.  Religious diversity is also accepted in the city, thus is reflected in its artifacts and services.  South Africa is known as the “Rainbow Nation”, a melting pot of cultures.

Cape Town is famous for their harbour and for their natural environment. 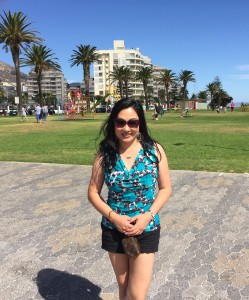 I like this city.  The people seemed very laid back. The sky was blue 99% of the time during my visit.  The sand on their various beaches are all fine and white.  The ocean is blue.  The surrounding is really very beautiful.  After having been here to experience it for myself, I can totally see how one can fall in love with this amazing city.  As of 2014, it is the 10th most popular city in Africa.  It is one of the most multicultural cities in the world.

I spent total of 2 weeks in Cape Town before heading to Paarl for Deon & Stephanie’s wedding.  I then visited the wine farms in Stellenbosch which is like our Napa Valley.  Then we visited a couple of wine estates on the Spice Route.  It was interesting to learn the difference between these 3 terms:

Wine farms or wine cellars = make the wine, bottle and label it.

Wineries = wine taste by owners or makers of the wine and wholesale selling (selling in bulk)  – the ordinary public does not have access to buy and taste wine at the winery.

Xenophobia is a new word I learned after I got to Cape Town because there is some of that going on in the Durban and Johannesburg areas, which is a 2 hour flight away.  Xenophobia is a “dislike of foreigners” but the recent incidents are black South African against black African coming from Somalia, Mozambique and Zimbabwe.  One of the complaints that caused all the violence are that locals are complaining that foreigners are taking over their jobs.  I was told by local people that when the foreigners arrive they work hard, create opportunities for themselves, make the money and seem more attractive to local woman therefore the jealousy of local man increased.  I believe no matter what the reason is there is still no excuse for mob justice.

I am very happy to get to know Deon and Stephanie at a deeper level after this trip.  Also been a real pleasure to have met my host, Paul who I lived with for 10 days.  And just before I left Cape Town, I went on a 5 hour dinner date with 2 amazing ladies, Talia and Jabulile, whom I met during the hike I did on the Lions Head.  Another new friend I met was Jay who was my tour guide in Kynsna.  For sure, I plan to stay connected with all these 6 people.  I have a strong feeling that I will cross path with them again someday somewhere again… 🙂

Here are some of my highlights in Cape Town:

Deon & Stephanie’s wedding on a vineyard in Paarl.  Very inspiring wedding.  I had an epiphany as a result of what I had witness through their love story that I had to write a blog called “Having faith in love again”… 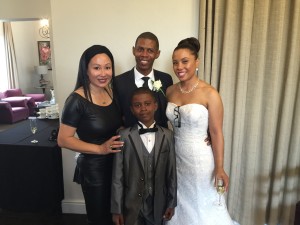 Skydiving – YES! I was actually crazy enough to jump 9000 feet off the plane! Skydiving was the most THRILLING experience ever!  Indoor skydiving can’t even come close!  So glad to check off another item on my bucket list now!

Sand-boarding – I really wanted to try sand-boarding when I was in Peru back in 2012 but didn’t make it. So glad to be able to do it here in Cape Town for the first time. Loved it! Beautiful and FUN! Oh and the best part was – for $20 extra, we get driven back up instead of walking up after every run! lol

Hiking – Sunrise hike on Lions Head was just as amazing as the sunset run along the beach in Sea Point!  This must be the most beautiful hike I had ever done.  The view was just stunning!  Total height was 2200 feet (669 meters) which is about as high as the Chief in Squamish.  It took me 2.5 hours total to go up and down which includes a 30 min break at the top to take in the magnificent view.  Above the city, adjacent to Table Mountains 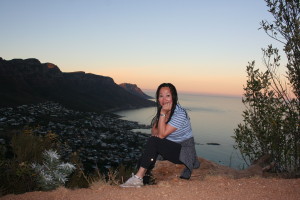 Robben Island – It was about an hour ferry ride to get to Robben Island where Nelson Mandela spent 18 of his 27 years of incarceration.  Our guide through the prison itself was held as a prisoner on the island for 7 years. It was a moving and emotional experience and left me wanting to know more about this man.  And for a start I watched the “Long Walk to Freedom” movie.  Great movie!  I hope to visit the Apartheid Museum when I get to Johannesburg to learn more about him and the history of this country.

Cape Point and Cape of Good Hope – It was a mild autumn day with the bluest of skies when we set out for Cape Point.  The 90 min drive along the coastline was spectacular.  First stop was The Cape of Good Hope – this is the most south-western point of the African continent.  Next stop was Cape Point.  The view was incredible!  The scenery actually reminded me of the drive to Whistler.  I saw an ostrich (a bird with skinny long neck) and baboons (like monkeys with big teeth) for the first time.

Blokart Sailing – This originated from New Zealand.  Blokart sailing comprises of a light and compact three wheeled buggy and a sail of anything from 2 m to 5.5m in length.With the right wind and experience, the buggy can reach up to a speed of 120 km/hr.

I was on Sunset beach, Muizenberg, Cape Town blokarting.  It was awesome! 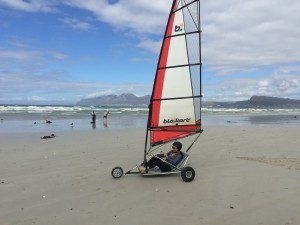 Waterfront – I really enjoyed walking around the waterfront.  Lots of shops, restaurants and beautiful views.  I think there were more than 150 tenants featuring over 365 innovative brands. 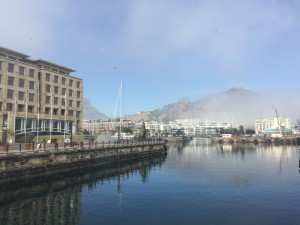 Cape Town city sightseeing – I decided to do the Red Hop on and Hop off open tour bus.   What a great way to see the spectacular scenery around Cape Town! 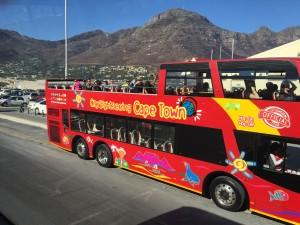 Wine Tasting –  I went for wine tasting in Cape Town and on the Spice Route.  The wine tasting is way cheaper here than in the Napa Valley.  It cost $3-$5 USD to taste 5 wines!  What a steal! 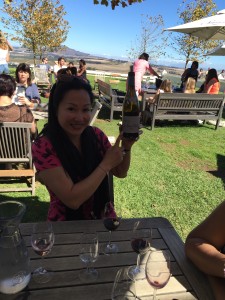 I was invited to be a guest at Pinelands High School where Deon teaches.  I did a Q&A session about my travel experience for the Tourism class students. I really enjoyed them! Their questions brought back so many memories. Sweet warm memories of those 2 years while I was traveling and doing volunteer teaching with Deon 3 years ago… 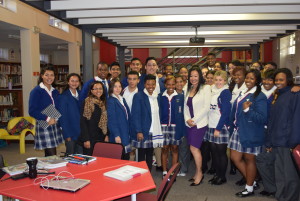 I look forward to coming back to Africa to see the other countries like Malawi, Zambia and Zimbabwe.  Also, I want to see the Victoria Falls and to visit Madagascar.  Hopefully it won’t be a solo trip next time.