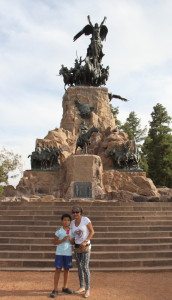 Oct. 22/12 – After totally going over our budget in Santiago, Chile, we decided to stay in Mendoza for 2 weeks to learn some Spanish and to save some money to help lower our per day average so that we could achieve our original goal of spending an average of $100/day only.  So, we ended up living in cheap hostels for $15/per person per night.  We were also buying grocery to cook in the hostel instead of going out to eat.  And so at the end of Mendoza, our average spending per day came to an average of $98/day only.  Yeah!! 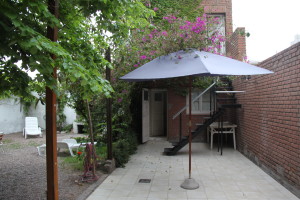 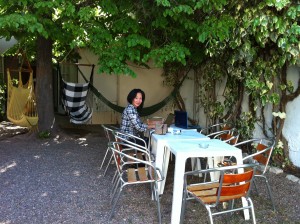 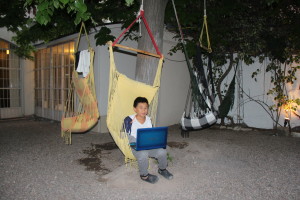 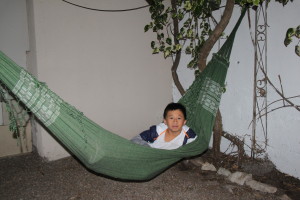 I think as our “Spanglish” improved,  our “cultural shock” slowly vanished too. However, I feel that really going forward is when we have started to enjoy our journey. 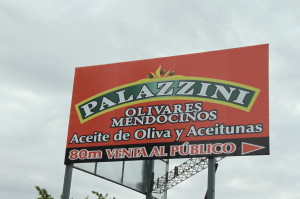 In the meantime, I am comforted in the thought that my “range of accommodation” has widened now.  On a 0 to 10 range, mine was 3 to 9 prior to this trip;  3 being last year’s Asia trip and 9 for the fact I stayed in the 7 star hotel in Burj Al Arab Hotel in Dubai.  But now, after these hostels experience, my range has widened to, I’d say a 2 to 9.  Zero would be sleeping on the streets.  It has been a very humbling experience for me but the self esteem I gained today due to making it this far is huge. Further, I think I did more reading while I was researching on places and things over the last 3 weeks than I ever did in the last 30 years of my life. 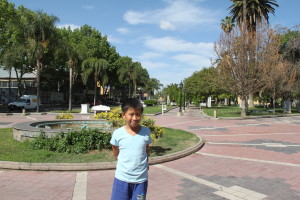 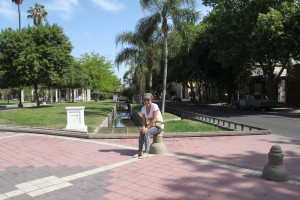 I have also discovered a lot of ways to save money such as exchanging money in the black market to get a better rate, using Groupons from the internet and other means to save on food, accommodation and tours.  I seriously lived as if I had no more money.  I figured that since I am only gonna do this experiment once, so I might as well “go big or go home!”  I explained the whole budgeting thing and its importance to Deon and offered him his share of the money to manage it himself but he said that he’d rather that we did the budgeting together.  I feel so grateful of how supportive he has been in terms of watching what we spend.  I see him looking at price tags of snacks in the grocery, then putting them down after he finds out how much they cost.  I hear him talking to himself, “Oh, that’s too much.”  For the things he really wanted, he would ask me, “Do we have a budget of this, Mom?” 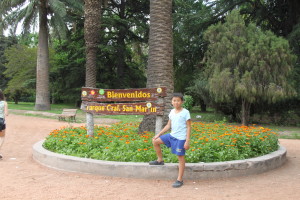 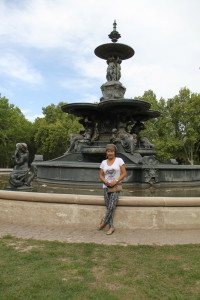 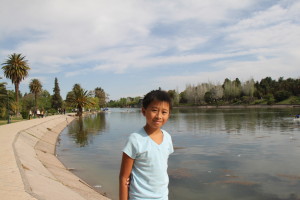 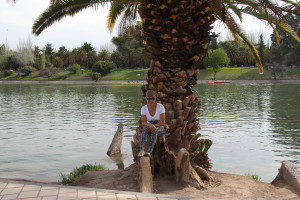 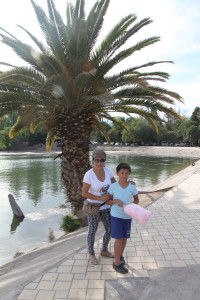 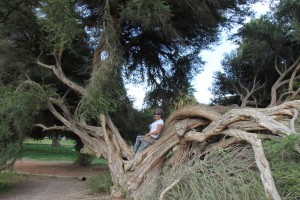 Mendoza is a quiet city.  Also, things are so much cheaper, up to 50%, here than in Santiago.  The people we bump into are very friendly and helpful.  For example, we were chatting with an elderly local lady who sat beside our table during lunch and by the time we got up to leave, she came over and gave us hugs and kisses.  This happened on a few other different occasions too. 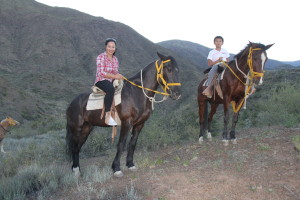 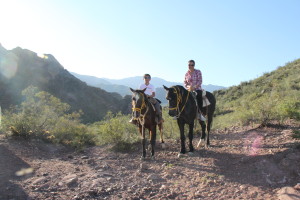 This city is very well known for wineries.  I was told that there are about 1400 wineries in Mendoza alone and that it produces 80% of Argentina wines.  Because Hostel Mora offers FREE wine, therefore I had been drinking a lot of Malbec, which is made from a type of grape that originated from France but grow very well in Mendoza and so that’s how Mendoza is very well-known for its “Malbec.”  The Argentine wine industry is the fifth largest producer of wine in the world.  Argentine wines started being exported during the 1990s, and are currently growing in popularity, making it now the largest wine exporter in South America.  I only visited a few wineries in Mendoza but that was enough for me to appreciate wine much more now since I finally got to see step by step how long and complicated wine-making process is. 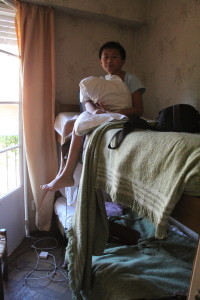 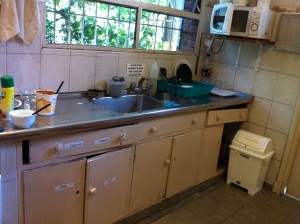 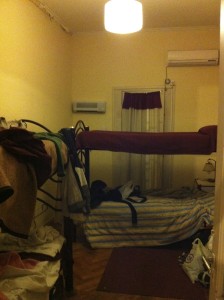 Hostel living – Being a “virgin backpacker,” I found that hostels were definitely a good choice of accommodation as verified by some experienced backpackers who shared their travelling experiences with me.  Through them, I learned so much about my upcoming journey and what to watch out for in the places I intend to go to or new places to add to my list. The first hostel we stayed at is older than any of the houses I demolished during my years in the construction industry in Vancouver.  This is easily compensated for by the relaxing hammocks in the backyard and some of mature people I met and felt a connection with on top of the FREE Malbec wine (BTW – that’s what’s keeping my weight.. sigh) every night. Yet, there was still the other side: the noise made by some younger backpackers and being awakened as an inconsiderate room-mate turned on the lights every time he’d come in the middle of the night (we were sleeping in a 4 people mixed dorm). 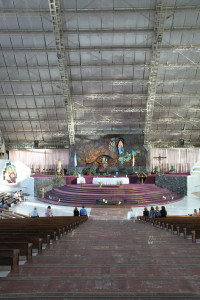 For $2 more, we moved to the second hostel for our last 4 nights in Mendoza.  The hostel is a bit newer and cleaner than the first, plus the bunk beds came with mattress and even though they were not comfortable at all, they were still better than the foam we slept on in the first hostel.  However, there are no FREE wine and no scrambled eggs for breakfast here.  Also, the energy felt “low and cold” here.  Finally, unlike in the first Hostel, everyone here just seemed to stay out or stay in their room because the common area was always empty. 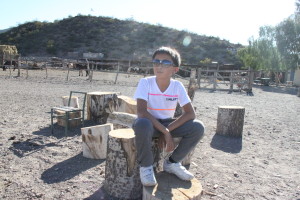 I am open to exploring other hostels in the future because the pros outweigh the cons now as I look back at my experience.  It’s really a hit and miss thing like many others things in life.  Over the last 2 weeks, I’ve seen backpackers aged 20 to 60 around.  Obviously, the ratio is about 80/20 with more young than old ones. There was an old couple I talked to who were very wise:  they started their backpacking trips together 25 years ago, raised kids after and now that the kids are grown up, they do their traveling together again.  Surprisingly, I see many single female travelling alone too.  I met 2 female doctors in their 30s who were really cool.  I look forward to learning more from those real “hard core” backpackers, about how they can keep going until they run out of money, then find a temporary job till they have enough to travel more.  I mean I definitely have the travel bug too but I just can not picture myself ever travelling till I run out of money.  One thing sure, though:  I know I have overcome the fear of travelling alone now and I can see how that can be a total difference experience altogether.  I feel so lucky because going backpacking today is much easier because of the host of information available in the internet – places to go or tips. 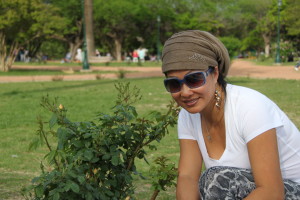 Spanish lessons:  We had a total of 26 hours in Spanish lessons over the last 2 weeks.  After the first week of whole day classes, I started to recall why I decided to get in the working world at such a young age – school is so much harder than work!!  OMG! It must be the age thingee but I can NOT remember things I learned in the morning by the afternoon!!  I am sure Deon would get a higher mark than I would if there was a test in the end.  And to think that there are just the 2 of us in a classroom!  Gosh, I don’t remember that learning Mandarin 15 years ago and Vietnamese 10 years ago was this hard!!  I feel so dumb now!!  I think I better get unretired and go back to work soon before my brain deteriorates faster than I would want it to!!

I was supposed to attend Intercultural Language School for 2 weeks but a couple of hours upon my arrival, I found out that one of the staff who works in this hostel offers private Spanish lessons.  And fortunately, he happens to be one of the teachers in the school we are attending.  So instead of paying 2-week tuition to the school, I only paid for 1 week and took week 2 with him which saved me 40% in cost per hour, on top of not having to wake up at 7:30AM to walk 4 blocks to class… 🙂

Sunset horseback riding tour – This tour was amazing.  There were 9 of us total.  We rode the horses for 2 hours in the Andes Mountain.  The BBQ and wine afterwards were awesome!  But the best part was the gathering around the bonfire after dinner, listening to the tour guide sing folk songs with his guitar.  I was told that I should be back to the hostel by 10pm but we didn’t get back till 1am because we had so much fun drinking wine, singing and chatting.  I met some great new people whom I have become friends with and whom I know I will continue to stay in touch with in the future… 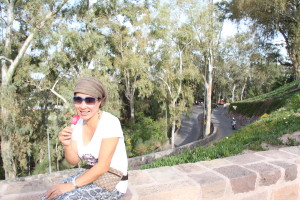 San Martin Park – This park was named in honor of General José de San Martin, who led the Argentine War of Independence.  I am impressed with the size of this park which the tour guide said is 500 hectares.  When I think of the Mall of Asia in Manila which is only 5 hectares but which was already very big for me to walk around, I can’t imagine walking in this 500 hectares here!!

The last 9 hour-ride from Santiago to Mendoza was not very pleasant so I bought ourselves “first class seats” this time to get to Buenos Aires since it only cost $100 each for a 13-hour bus ride.  If we were to fly out, then it would cost $300 for a 90 minute flight.  I am very excited to start my Argentina Tango lessons next week.  I just hope I don’t feel the same way about Tango lesson as I do about Spanish lessons.  LOL