October 13/12 –  The highlight for Santiago for me was seeing how much Deon’s Chinese has improved from the first day we got here to the day we left.  After I experienced how hard it is to not be able to speak a local language, I was motivated to sign up for Spanish lessons in Argentina (because it’s way cheaper than doing it in Santiago).  Then, I asked myself why I was not teaching my son a language I already know well since I would be with him 24/7 for the next 8 months.  I was not aware how little Cantonese he knew and how off his pronunciation was until now.  So I told him I would start giving him some “play time on the computer” during weekdays too (normally, he only gets to play on weekends) if he starts speaking Chinese to me.  How long of play time he ends up getting will depend on how much Chinese he speaks during the day.  To my complete surprise, Deon went from speaking Chinese 5% on day 1 to 25% by day 8.  With the speed he is improving, I think he should do pretty well by Feb. 9/13.  Then we will be in Taiwan for him to start speaking Mandarin for a few months!!  I really think the future will be in Asia, therefore being able to speak Chinese can only benefit him in his future should he choose his career to be related to the Asian countries. 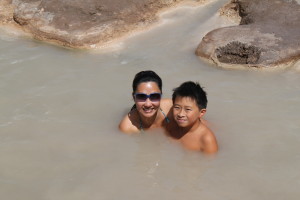 Santiago – is the Capital of Chile.  This country’s topography is very narrow.  The average width is approximately 175 Km and the length is 4270 Km, of which 1400 km is used for vineyards and fruits and vegetables plantation.  Chile is ranked number 62 among the  238 countries in the world in terms of population.  The population in Chile is around 16 million and of that, 1/3 lives in Santiago (around 5 million).  (Oh btw, Canada is ranked 35 with  a total population of 34 million and of that, BC has 4.4 million).

Santiago’s spring just started on Sept. 21/12 so the weather is perfect.  The temperature is 10 to 23 degrees, but unlike Vancouver, there is NO rain here.  LOL.  English is not good enough to get by in Chile for sure because only 5% of the population here speaks English.  Unless they go to a private school, students have only 2 hours a week of English classes, so it’s not hard to imagine how little the Chileans can speak English.  Unlike in Panama City, I find the people here more friendly and always willing to help as much as they can even when we can not communicate in Spanish to them and they can’t speak English to us.  I met a few new local friends whom I went to eat Peru cuisine and to salsa clubs with.  They were super kind and friendly so I offered to host Javier, Jorge and Cristy should they decide to come to visit Vancouver next summer.  BTW – the Chileans start partying at 11pm and don’t end till 5am!!  I had a great time but they called me “Cinderella” because I wanted to leave at 2:30am.  LOL.

The first 36 hours of arriving in Santiago – After spending $56 dollar for a not-too-fancy lunch (I had beef and a beer and Deon had chicken) then going around to check out 3 hostels in Santiago, I am not sure anymore if I can continue holding on to my promise of keeping “$100/day all inclusive budget” plan.  The hostels cost $17/person for the 4-people dorm or $58 for private rooms.  I almost threw up when I got in 2 out of the 3 hostels because they stunk so badly.  Checking these 3 hostels cost us $20 taxi fare (given the distance in between them, walking was impossible).  This meant that we ran out of money for dinner so we stayed in and skipped dinner.  For the rest of the evening I was trying to explore the difference between “man-made challenge” and “self-torturing.”  But until I am clear on the difference, I am not giving up yet! 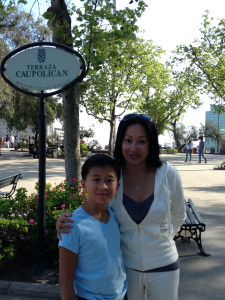 Then the next morning, we quickly learned to save our yogurt and apple from breakfast in case we got hungry later, since breakfast is included in this B & B already. 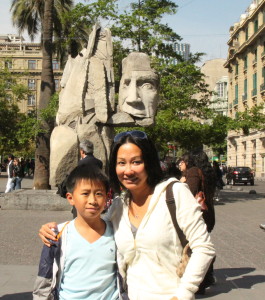 Chile is NOT inexpensive as I had expected at all.  For example, an 8” pepperoni pizza cost $18 to $25.  A glass of house red wine cost $10.  Caesar salad ranges from $8 to $15.  And I am talking about restaurants like our Knight & Day and Earls only.  We then explored the fast food option and found a SUBWAY but a 6” sub cost $5.80.  A small triangle shaped cold ham & cheese sandwich from a convenience store like 7-11 costs $3 but I will need to eat 2 to be full.  All these prices I am quoting are in USD!! 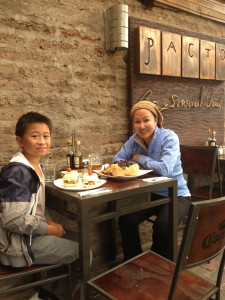 I must be reading a very outdated version of the “backpacker’s bible – The Lonely Planet” because the exchange rate published there is 550 peso for 1 USD but it’s only 450 peso for 1 USD now.  The rates quoted for hostel and food is way off from today’s reality too.  Chile is nice but just too expensive for our budgeted backpacking journey so we decided to leave after a week because Argentina is supposed to be cheaper.  We will be taking the 7 hour bus ride to Mendoza (well known for wineries) because it only costs $30 each on the bus instead of $300 each to get out of Santiago by air.  I booked the hostel in Mendoza for $15/person per night already.  So $30 total will include breakfast and a glass of wine at night.  🙂  Pretty good deal!!.  Oh!  And it’s located only 4 blocks from Intercultural Language Institute where we had enrolled for Spanish lessons already.  This means we can save on daily transportation.  Let’s hope that the hostel won’t smell as bad as the first 2 I saw in Santiago which made me wanna puke after a 2-minute visit.

I guarantee our AQ level (Adversity Quotient) will increase after we are done with our year two journey! 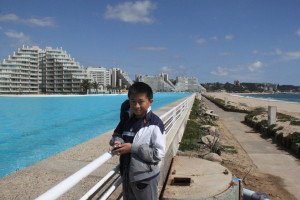 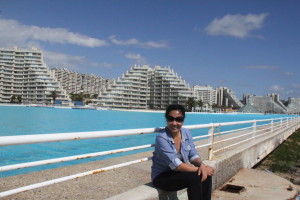 Algarroba – A city that is 60 miles from Santiago is where the World’s Largest Swimming Pool is located.  The pool is more than 1,000 yards long, covers 20 acres, has a 115-foot deep end, and holds 66 million gallons of crystal clear sea water which is like 20 Olympic-sized swimming pool.  The Guinness Book of Records has named this vast pool beside the sea in Chile as the biggest in the world.  This pool took 5 years to build, cost nearly £1 billion and maintained at around £2 million annually.  It was opened in December 2006 and called The Crystal Lagoon at San Alfonso del Mar.  I was so surprised to learn that this pool is actually “private” therefore we can’t even pay to go and swim there.  We need to be owners of one of those condos or rent one of those in order to swim there. The nightly rental of the condo is around $300 and I think there’s minimum 3 nights!  Ouch!!  But visiting this pool is the main reason for our visit to Chile originally, therefore I decided we have to go and see it even though it’s too cold to swim in it at this time.  But instead of booking those condos, we will do a day trip instead which will cost us $250 USD.  The Algarroba beach next to this pool is a public beach so we will have a picnic on the beach and still be able to see the pool clearly from where we are. 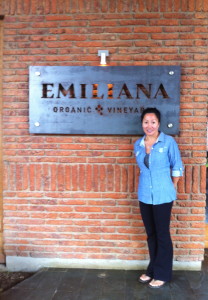 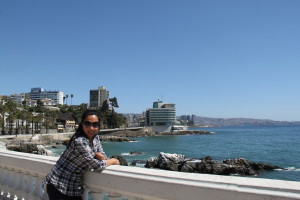 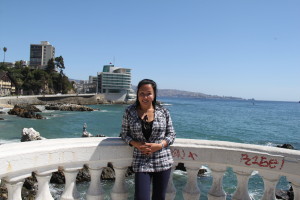 Valparaiso – This city is located 120 km away from Santiago.  The highlight of Valparaiso for me was that I got robbed on one of the hills here.  We joined a day tour to check out this city.  I got off the tour bus with 40 other tourists.  I was taking photo with my new iPhone, and then some kid ran out of nowhere and snatched my new Iphone from my hand!  I had never seen anyone run this quickly, therefore I didn’t even try to attempt to chase him.  I was not happy because a lot of the pictures with that phone are now gone.  I was told Argentina and Brazil are lot worse than here!!  I was warned to not wear brand name sunglasses, watch, earrings or necklace!! This meant being extra extra careful when we get there. 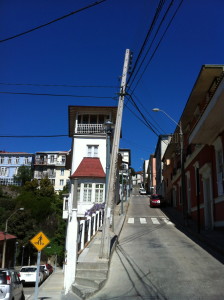 The houses in Valparaiso are built on some of the 41 hills.  Instead of cable cars, they have “elevators” to get down the hills.  There were originally 29 elevators but only 16 remaining now and of that, only 5 are working. 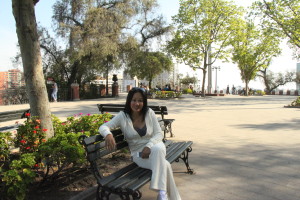 It was worth having visited this colonial city, to take in the faded grandeur of this unique harbor town, nestled between the sea and the forested coastal mountain range. 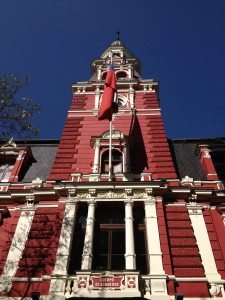 In 2003, Valparaiso, meaning “the valley of paradise,” was declared a world heritage site by UNESCO. 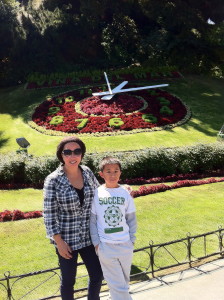 Vina Del Mar – meaning “Vineyard by the Sea” is a city and a commune on central Chile’s Pacific coast.  Its long stretches of white sandy beaches are a major attraction for national and international tourists. Chile’s fourth largest city, Vina del Mar in Valparaiso is also a popular summer beach resort. A Mediterranean climate prevails and an appealing array of sandy strips beckon, including Miramar, Renaca, Las Salinas and Casino. 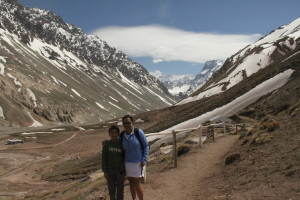 Hot Springs of Colina –  We booked a private truck to take us on a 3-hour drive, with 2 of the 3 on non-paved bumpy road to get to relax in the therapeutic and energizing mineral waters of the Baños Colia Hot Springs nestled between the Andes mountain tops. The rustic hot springs are located near Santiago, at the foot of the majestic San José Volcano that stands 2.550m high. The temperature of the 8 different pools varies between 25°c and 60°c.  It is quite magical to be so high (2500 meters) in the Andes enjoying the fresh air here…