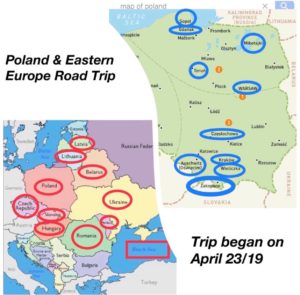 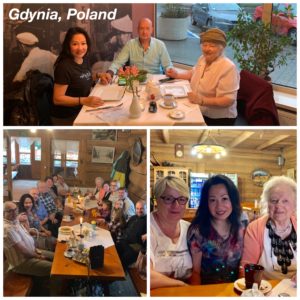 We started our road trip in Gdynia, a port city on the Baltic coast of Poland, known for its modernist buildings.  Andrew’s mom lives here which was why we started our month-long road trip here and ended it here as well, so we could spend more time with her.  She is such an amazing lady and I feel so honoured to have met her despite the fact we needed to use Google translator to communicate.  She is such a sweetheart!  Miss her already.

Cities we visited on our road trip: 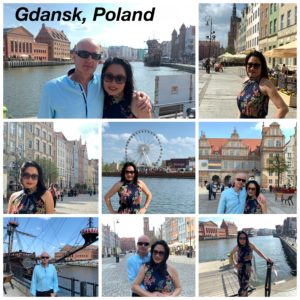 Gdansk is a port city on the Baltic coast of Poland, known as a center for the world’s amber trade. 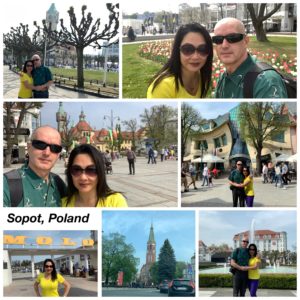 Sopot, a town on the Baltic Sea in northern Poland, forms the so-called Tri-City metropolitan area along with neighboring cities Gdynia and Gdańsk. Sopot is known for its health spas, sandy beach and its long wooden pier that extends into the Bay of Gdańsk. 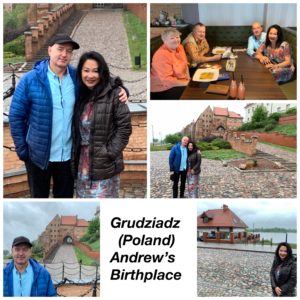 Grudziądz is a city of around 96,000 inhabitants along the Vistula River in northern Poland.  We only stopped here to have lunch with Andrew’s mentor, aka “his father” when he growing up.  He and his wife are such a lovely couple. 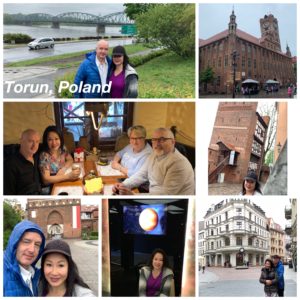 Toruń is a city in northern-central Poland, also along the Vistula River.  We had a great time visiting Andrew’s step brother and his wife in this city.  Surprisingly this was also the only city where we did any shopping so far.

Warsaw is the capital of Poland and I was so impressed to see how this city was restored back to its original beauty and beyond after heavy damage (almost completely demolished) during WWII. 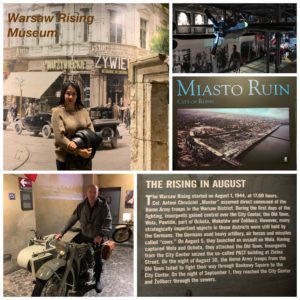 The Warsaw Uprising Museum, in the Wola district of Warsaw, is dedicated to the Warsaw Uprising of 1944. The museum was established in 1983, but no construction work took place for many years, but it finally opened on July 31, 2004, marking the 60th anniversary of the uprising. 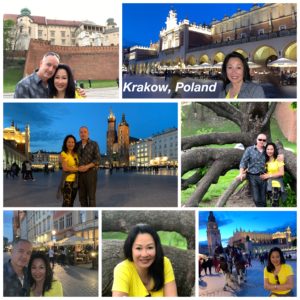 Krakow is the second largest and one of the oldest cities in Poland. Situated on the Vistula River in the Lesser Poland region, the city dates back to the 7th century.  It was our favourite city on this trip: I love the nightlife here!

The Black Madonna of Częstochowa, also known as Our Lady of Częstochowa, is a revered icon of the Virgin Mary housed in the Jasna Góra Monastery in Częstochowa, Poland. Very interesting story behind the cut on her face! 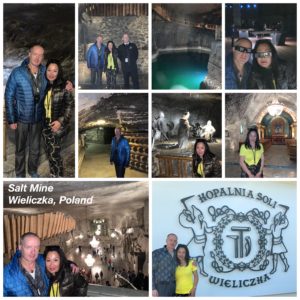 The Wieliczka Salt Mine, over 700 years old, is located in the town of Wieliczka, southern Poland and was included on the first UNESCO list when it only had 12 items. Although the mine is 327 meters (1073 feet) deep, we only ventured as far as 135 meters (442 feet) underground.  The total length of the mine is 300 km but we only toured 3 km (1%) of it today. About 35 million cubic feet of wood was used support the mine so it doesn’t collapse. The salt here is 13 million years old, dating back from when the sea evaporated.  There are over 2000 chambers (huge open areas) but we only saw 20 today.

The Auschwitz-Birkenau Memorial and Museum – This former Nazi Concentration and Extermination Camp is in Oświęcim, Poland.  For me, this was a very powerful and very sad tour, as emotional as The Killing Field tour in Cambodia.  I learned so much about the history of Poland, Germany and WWII during this tour. 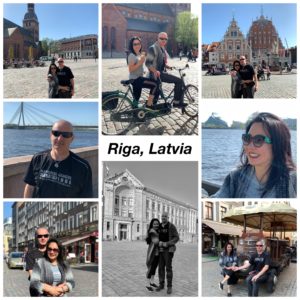 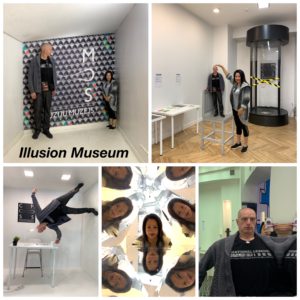 Visiting the “Illusion Museum” was the highlight for me in Riga. It’s my first time and I was totally fascinated! I felt like a little girl inside a candy store! 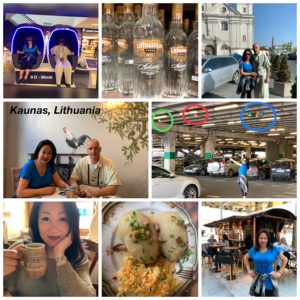 Kaunas is the second-largest city in Lithuania.   Lithuania and Poland used to be united as a “dual country” for over 200 years from 1569 and it was one of the largest countries in Europe at that time. the highlight for me was watching the 9D movie inside the shopping mall plus seeing how advanced their parking lot was; e.g., there are lights inside the parking lot to show you exactly which aisle has how many vacant spots!  I was impressed because I definitely did not expect to see this here. 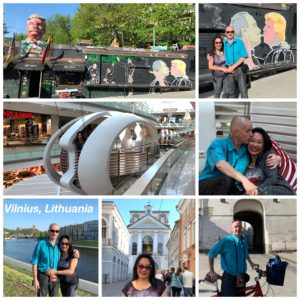 Vilnius, Lithuania’s capital, is known for its baroque architecture.  What a beautiful city! Old yet modern; serious, yet fun. Not surprising that the old part of City was declared in 1994 as a UNESCO World Heritage Site.  I was so impressed with the beauty of the Europa shopping mall and the surrounding high rises! 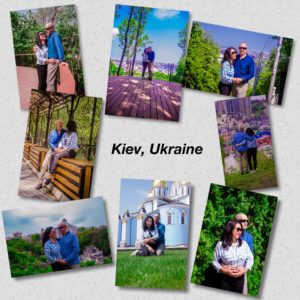 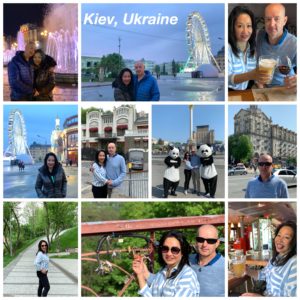 Kiev or Kyiv is the capital and most populous city of Ukraine, as well as the 7th most popular city in Europe.  I didn’t expect to see how clean, lively and beautiful this city is, a pleasant surprise after having to pay 100 EURO (bribe) at the border in order to get into this country! 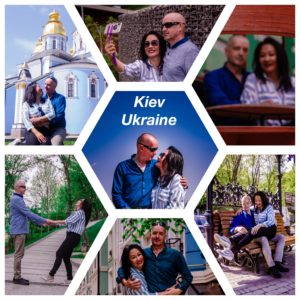 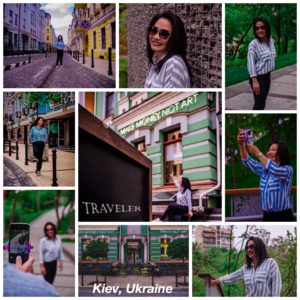 Kiev is not only one of the oldest cities but also an important industrial, scientific, educational and cultural center of Eastern Europe.  It is home to many high-tech industries, higher education institutions, and world-famous historical landmarks.  Kiev is the most pro-Western region of Ukraine advocating tighter integration with the European Union. 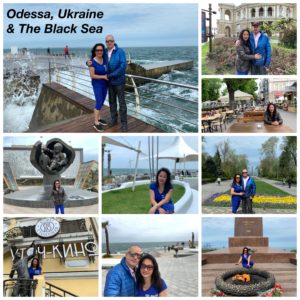 Odessa is the third most populous city of Ukraine and a major tourism center, seaport and transport hub located on the northwestern shore of the Black Sea.  Odessa is a city that absorbs. It’s defined by diverse influences, by triumph and tragedy, and, because of its location on the Black Sea, by fantastic seafood. Odessans proudly wave the independent Ukrainian flag nowadays, but the Soviets, Germans, and Ottoman Empire have all occupied the city in its less than 250-year history. As such, Ukraine’s third largest city is an amalgamation of cultures and home to one of the most vibrant culinary scenes in Europe. 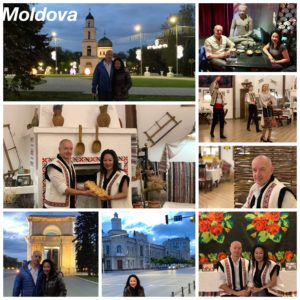 Chișinău is the capital city of Moldova, a landlocked country in Eastern Europe, bordered by Romania to the west and Ukraine to the north, east, and south.

I had been to wine tasting in 5 continents and to say I was impressed by the wineries here is an understatement! Moldova has 112 thousand hectares of vineyards planted with over 50 types of varieties. Local Moldavians start their day with a glass of white wine followed by 2 glasses of red wine and end the day with a glass of sparkling wine! 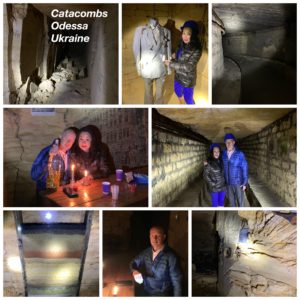 We visited the unique underground museum to explore Odessa’s catacombs.  Learned so much history ranging from smuggling and slave trading, to sheltering partisans and acting as a Cold War bunker. The catacombs have held such a rich history! 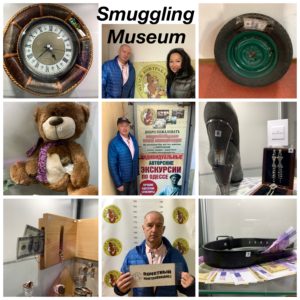 Muzey Kontrabandy is a “Smuggling” Museum. The exhibition consists of items seized from the smugglers since the founding of Odessa (Ukraine) to the present day, as well as illustrations of how these things were transported. Today, the museum has more than 150 exhibits that will delight your imagination as you see cocaine caches, dishes of heroin, car doors in which are hidden 500 packages of cigarettes, as well as silk, lace and objects of art, which at various times were of great interest to smugglers and guardians of the laws.

Purcari Wine was the first winery we visiting for wine tasting in Moldova. I was totally shocked to learn the history of Moldova wine making began in 3000 BC, while the first vines were recorded here 7000 years BC, i.e., OVER 9000 YEARS AGO! We enjoyed the wine here so much that we extended our stay so we can check out 2 other wineries in Moldova. 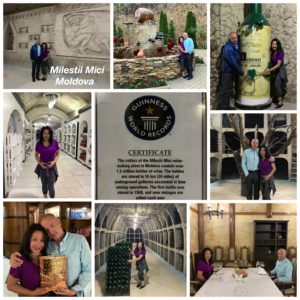 Milestii Mici made it to the Guinness World Records in 2007 for having 1.5 million bottles of wine in their underground cellar. They have 20 different variety of grapes here. There is 200 km long tunnel but only 55 km is used for wine storage and only 5 km of that is open for tourists to visit. The total storage capacity is 65 million liters but at currently, there’s only 10 million litres of wine; still enough to get all the Chinese people in the world drunk at the same time! 70% of their wine are sold to China! I was so surprised to learn they only have 40,000 visitors a year. 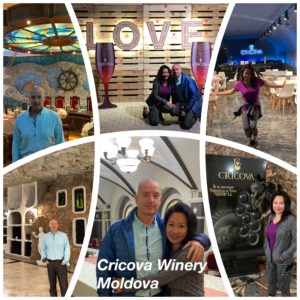 Cricova is a very impressive underground city of wine that stores the oldest (1902) vintage wine. They are renowned and licensed for sparkling wine.  The underground roadways are 100 meters deep and 120 km long but they are only using 80 km for wine storage. I was so impressed with their 5 beautiful wine tasting rooms, 100 meters (330 feet) underground.  They have 100,000 visitors a year. 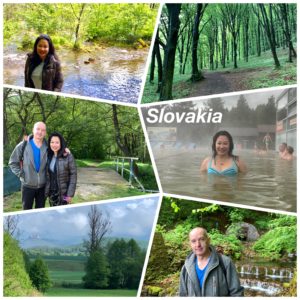 Slovakia is a landlocked country in Central Europe bordered by Poland to the north, Ukraine to the east, Hungary to the south, Austria to the west, and the Czech Republic to the northwest.  Slovakia’s territory spans about 49,000 square kilometres and is mostly mountainous, with many beautiful caves and underground places. Many of them are hidden and undiscovered and can be entered only by experienced cavers. Only a handful of 2400+ caves in Slovakia can be seen and admired by the public. 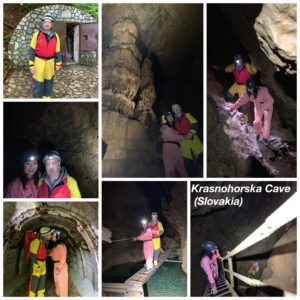 We hired a private guide for a particular closed cave in Slovakia since it was featured in the Guinness Book of Records.  This is my first time going into a cave by foot, and I found it to be a very interesting experience. Krásnohorská Cave is a karst cave situated at the northern foot of the Silická planina plain, in the Slovak Karst, 6.5 km southeast of Rožňava, in Slovakia. 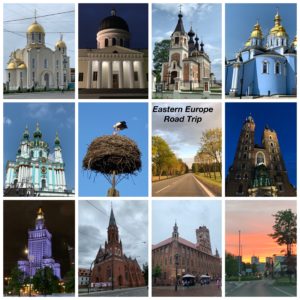 After 10 countries, 20 cities, our road trip has come to an end now.  I am grateful to Andrew for doing such a great job in planning and driving (6000 km) over the last month!  What an amazing trip!  Lots of different emotions at different times in different places. Very educational too!  I learned so much about Europe and Poland’s history and what happened during WWII on this trip.  It was like a year of history lessons in a month!