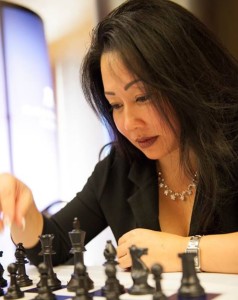 Two years ago, when Maurice first told me his dream of hosting a million dollar chess tournament, I have to say I was very excited. Knowing what I do today, I would have said “Keep dreaming!” And that was without knowing I was going to get 8 marriage proposals from strange chess players whom I had never met.  That’s on top of the 2 guys who sent me very private videos of themselves (which, by the way, were not very impressive).

Seriously, as you all know, Maurice has an incredible passion for chess. And he is a celebrity in his own right. His time is very valuable and there are certainly a lot of ways for him to make money doing things that he is very capable, dare I say talented enough to do. Seeing the work he’s put in over the last two years without being paid even a dime has made me appreciate his love for chess and his desire to see it grow. Sure, if we succeed, he will be rewarded for his efforts. But that may take years, years he could have been doing more commentary, public appearances, teaching, writing books, doing DVDs, and a host of other things that would put real dollars in his pocket and make his life a lot easier. I have to say that I really admire the fact that he is one of those people who does not value money that highly and does things because he believes in them and is really passionate about them. Please join me in giving a hand to my partner, Maurice Ashley.

I would also like to thank the rest of our staff for putting in countless of extra hours beyond the call of duty. Our Operations Manager Teresa, Stu our Ratings Officer, my designer brother Eric, and Dave Kriewall, who created the new digital results taking system that will be used for the first time in this tournament. They and many other volunteers have worked behind the scenes to make this all come together and without them, I would have gone crazy a long time ago.

There are two numbers that I have to say I am proud of: 50 and 52. That’s the number of Grandmasters playing, and the number of countries represented. It’s a good feeling to reach that kind of milestone. It says you out there who have come from all over the world appreciate this event and what it’s all about. That really warms my heart, and makes all of the hard work, which can really seem overwhelming at time, seem worth it.

So I have just one favor to ask: For each one of you here, spend the next year convincing one other person to join the tournament. That’s it: just one other person. I don’t care what you have to do: sweet talk them, bribe them, threaten them! Just make it happen. If each one of you gets one more person, then we’ll have about 1200 participants next year, and then we can really talk about this tournament being a success.

Thanks for coming and I hope you enjoy yourself. Thank you.

2 thoughts on “Amy’s thank you speech at MC2”