Thanks to Jared for creating this video for me.  It brought back memories which I think would be a good idea to write a blog on because this was one of the many highlights of my life events.  This live Global TV interview was done on September 15, 2014 in Burnaby, BC.

I recall that in another blog, I shared with you, dear readers, that I had always feared speaking in front of a group of people in more than a casual conversation set up.  My stage fright was so much that I had always shied away from any and all invitations to go up to a podium and speak.  And that, no matter how very familiar I might have been with the topic. 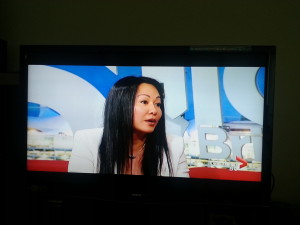 When I decided to go ahead with Millionaire Chess, my business partner, Maurice Ashley told me there was no way that I could get away from doing a thank you speech during MC1 in Vegas therefore I knew that it was time I worked on my fear of public speaking.

And so I enrolled at 4 different Toastmaster’s Club, wrote my speeches and practiced them until they sounded more conversational and natural rather than read.  Eventually, one Toastmaster’s night after another, I slowly became more confident, I slowly sounded more natural.  But what I wanted to achieve was to overcome all nervousness – no butterflies in my stomach, no sweating, no heart beating hard, no fear at all.

My first challenge was the interview by New York Times who wanted to do a telephone interview with me; I knew that it would definitely help promote MC and Chess, so I agreed.  I was very nervous especially during the first 10 minutes then it got easier, just like talking to a friend.  I was surprised afterwards and told myself it wasn’t as hard as I had thought it would be!

But never, never did I ever imagine that I would need to or dare to do a live interview on TV.  Why? Because the deal between Maurice and me was that he would be the person to deal with all media since he’s the chess celebrity while I deal with the business side and back end stuff.  Having a phone interview is one thing but doing a live interview on TV is something else!

And so, there I was, seated right next to these TV newscasters of Global TV in the morning of September 15, 2014, right at their studio in Burnaby, BC.  Even though  I was totally nervous, I knew it would be good for MC and for the future of chess. Then the butterflies came back, lots of them.  The sweating started.  And the drums started beating in my chest fast.   Sure, I was nervous but the goal was so clear that I managed to overcome the fear at that time.   And  the nicest part of it was that my friends told me that I actually seemed natural and confident.  Wow!

Well, they had me talk about our objectives of staging MC, about how I got into chess, about how we intend to not make the broadcast boring. It wasn’t a long interview, just over 5 minutes. But it felt much longer because of how I felt.  What an experience!

Being interviewed live on TV for the first time is another entry to put in my life history. 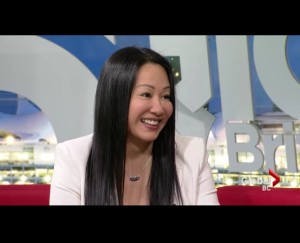