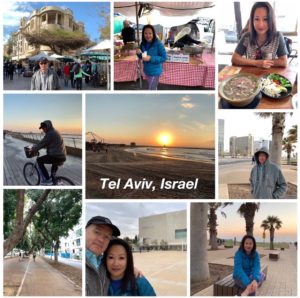 Our first stop in Israel is Tel Aviv, a clean and bike friendly city.  However, it is far from a cheap destination to visit! The city is often as expensive or more expensive than many of its European counterparts. Nevertheless, beautiful sea walls and amazing nightlife here make it worthwhile! Oh– and it’s the only place in the Middle East where two boys can kiss and hold hands in public!

I was totally fascinated with the tour of the Kibbutz (Ma’agan Michael), a thriving example of one of the last Kibbutzim (communal village) in Israel, and one of the wealthiest ones. I really enjoyed the visit and surprised at all l learned from our guide, Layla, explaining how their system works.

Caesarea was built as a port city by Herod the Great at around 25 BCE, and many of the ruins still stand. We toured the very large excavations in what is now a national park, and saw the ruins of what used to be extensive roads, buildings, a large theatre hippodrome and an ancient port.

We also visited Nazareth, the city of Jesus’s childhood and the city in which Mary was told she would give birth to the Son of God.

Then we moved on to Capernaum, a place of historical significance for millions of Christians throughout the world. There were the remains of Peter’s house where Jesus supposedly had many meetings with his disciples.

Mount of Beatitudes, the location where Jesus delivered his famous Sermon on the Mount.

Jerusalem, the holy city to Christians, Jews, and Muslims around the world!

Obviously the “Holy Land” will be more meaningful to those that are religious.

After a relaxing hour long hike to see the Banyas Waterfalls in the Banias Nature Reserve and listening to 4000 years of history in 3 days, it’s time for 2 glasses of wine for me! LOL!  Wine tasting at the Odem Winery in Golan Heights was so nice!

Then we went to Masada (Hebrew for fortress), a place of gaunt and majestic beauty that has become one of the Jewish people’s greatest symbols as the place where the last Jewish stronghold against Roman invasion stood. More than 2000 years have passed since the fall of Masada yet the regional climate and it’s remoteness have helped to preserve the remains of its extraordinary story. Masada was declared a UNESCO World Heritage site in 2001.

One of the highlights of visiting Israel is floating in the Dead Sea as it had been on my bucket list for over 2 decades! The Dead Sea is the lowest point on earth, where not a single living creature can survive in the high salt-content waters. They say these mineral rich waters and mud are supremely good for the skin!