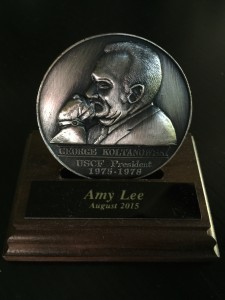 The George Koltanowski Award: Another Feather in Our Cap

Below is the short speech I would make if I could have attended the Awarding Ceremony:

I am deeply honored and humbled to receive the George Koltanowski Award given by the United States Chess Federation (USCF). I am grateful to be recognized for my small contribution to the great game of chess. I never expected to get any award, but it is certainly nice to be received confirmation that all our effort and hard work have been appreciated. I hope to continue to live up to the spirit of the award and to make my family and friends proud. Thanks so much for this great honour. 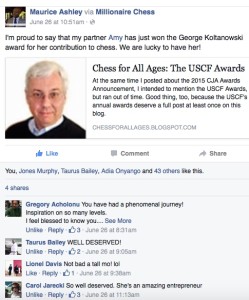 These were the questions I was asked;

How did you get started in chess?

– I got my kids into chess when they were growing up because I saw great value in it.  Later I met my business partner Maurice Ashley at a personal development retreat, and he got me excited about his ideas for making chess more popular.

What is your most memorable chess experience?

– Seeing the faces of the happy chess players during the Millionaire Chess Open.  We had put in so much hard work, and it was satisfying to see how much it was appreciated.

What are your goals related to chess?

– To make chess more in the mainstream.  It doesn’t make much sense that a game played by so many people doesn’t get more media attention.  We hope to change that.

What advice would you offer other chess enthusiasts?

– Everyone has to find a way to promote chess if it’s ever going to become more popular.  We are all in this together.

It was totally unexpected but this is a good event to usher in the 2015 MC! A very good coincidence.

The ceremony will be held at a luncheon sponsored by USCF on Aug. 8, 2015 in Arizona.