Before this trip, I had been bugging my mom and uncle for five years to take me to Dongxing for a “dig root” trip.  I felt then that it was important to see my roots, to see where my family history began.  I didn’t need to go far back to all my ancestors, but I wanted to know the history of my grandparents since I grew up with them.  I was fascinated to know how and why they chose to migrate from China to Vietnam before my parents were born.  I had also been curious to learn the full story of how we went about processing our refugee status since I was only 7 years old when it all happened. 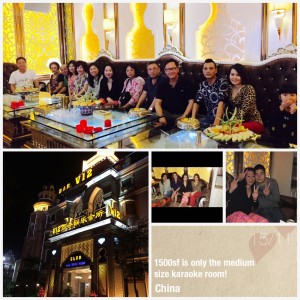 Finally, the timing was right when my uncle Andy sold his house and decided he wanted to take a vacation with his siblings and decided he wanted to see our only remaining relatives in China as well. I personally traveled alone, and the trip to Dongxing took 24 hours:  13 hours from Vancouver to Shanghai, 4.5 hours layover , then 3.5 hours flight to Nanning.  After that, I took a 3-hour car ride to finally join my mom, her siblings and my older sister, 8 of them in all, who had already arrived in the town 2 days before.  It was here that we would meet my grandma’s youngest sibling, Great Auntie number 4, and her 7 married kids, 18 grandchildren and 12 great grandchildren.  There are also another two dozen relatives from my grandpa’s side living here as well.

All our relatives are very warm and friendly.  They definitely do maintain the tradition of upholding highly the value of family/relative. They have a famous line that loosely translates to “If it’s not your chicken, then they will not enter your coop.” This means that when relatives show up to visit, one should always be a great host since they wouldn’t have landed at your door if they weren’t  “family” to begin with. 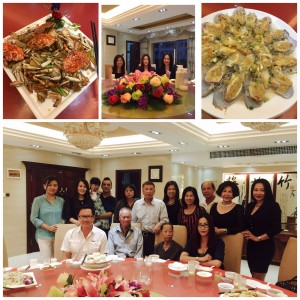 Dongxing is a small town in Guangxi province in southwestern China.  The town has a population of 150,000 living in a total area of 540.7 km2  (208.8 sq mi).  There are 4 major streets and that run only 11 kms connecting the roads from one end to the other.  No wonder I never see any traffic jams!  Given the size and population here, I was impressed with how much the city has to offer. There are a number of fancy nightclubs, clothing stores and expensive cars. This has a lot to do with how wealthy the people are here due to the smuggling industry that began 3 decades ago.  However, despite the outward trappings of wealth, there is definitely a big difference between the mindset of the people here and those in the big cities like Guangzhou, Shanghai, Beijing or Shenzhen.  With what I have seen so far, it’s obvious that it will take a long time before the lifestyle here catches up with the big cities.  Funnily enough, China’s President feels that China will catch up with the west within the next 3 decades!

Honestly, the way I see it, “catching up” will be a lot of hard work.  For example, parents take children as young as 2 years old to join adults in private karaoke rooms despite the heavy smoke and loud music. People here don’t mind throwing garbage such as pumpkin seeds, fruit skins, napkins, whatever they’ve finished using, right on the floor next to where they are sitting.  Servers come by with a broom every 15 mins to sweep right near or even on(!) the feet of the customers.  In the hotel where we stayed, which is supposed to be pretty high end, the staff would just continue to walk past even while you are clearly trying to talk to them.  Oddly, there’s no concept of eye contact and no smiles of acknowledgment either.  Hotel management will not turn on the air conditioning unit in the breakfast buffet area unless the place is sufficiently full. One can easily feel that people here have no sense of customer service.  Perhaps this has a lot to do with the city not being dependant on tourism since the closest domestic airport is 3 hrs away and the closest international airport is 3.5 hours from that. Whatever the reasons, it will certainly take some time before the people here actually know or care to change to some faraway standard that is being imposed on them from the outside.

There are 2 major industries here:  making red rose furniture (considered a luxury item) and smuggling.  Yes, smuggling is considered an industry. Smuggling is common since Vietnam is just across the river, which takes literally less than 2 mins to swim across.  The Chinese smuggle things like frozen meat (beef, pork, chicken, all kinds of intestines), used electronics, cars, cigarettes, and alcohol.  The containers come from places all over the world such as the US, Australia, Hong Kong, Brazil, India, New Zealand, etc. into Vietnam where unlike in China, anything and everything is allowed to come in. The products are then smuggled into this town and then get distributed across China.  The people here started to become very wealthy 3 decades ago up till 2.5 years ago when the new president (Xi Jinping) decided to eradicate all corruption in China.

I am really glad I finally achieved my “digging.”  I now have learned a lot more about my “roots”.  It’s great to know why my grandparents moved to Vietnam and how our whole refugee process began.  I feel complete because I found answers to things that didn’t make sense to me, even for simple questions such as why I don’t know Vietnamese or Chinese.  I didn’t realize that kindergarten doesn’t start till 7 years old and that was how old I was when I left Vietnam.  I now understand that I don’t know how to read Chinese because I was only in China for a few months before leaving for Hong Kong and then shortly thereafter for Canada.  This helps explain why I don’t have any childhood school memories.  I feel complete as if I have found all the missing pieces to a puzzle.  I really enjoyed listening to the many old time family stories even though I was shocked and saddened by some brutal facts that happened back then such as destroying girls as soon as they were born because girls were considered a liability.  Some of these things I had heard from my grandparents, and some I hadn’t known until this trip.

It was very inspiring to see my great auntie being happily married to a man she never met until her wedding day.  They have now been married for 61 years, and they told me they couldn’t imagine living a day without seeing each other.  Very sweet!  My own grandparents also met each other for the first time on their wedding day, and they were also happily married till the day my grandpa died in 1982.  They had 10 children, and my mom was #2 of the 10.  It really makes me wonder whether arranged marriages the way it was practiced back in those days are better than having the freedom to love and to marry the person of your choice today. While I personally prefer having a choice, given the high divorce rate in the West (I was divorced myself!), I am not so sure which way is actually better.

I was happy that, upon my request, one of my relatives agreed to take me to see the pier where our sail boat departed to Hong Kong when we became refugees when I was 7 years old.  My only memory of that place was of walking through thigh high water before getting picked up and drop onto the small 50 foot sailboat with space just big enough for 54 people to sit in.  Yes, just to sit in. It’s hard for me to imagine how uncomfortable those 54 people must have felt compared to how small my 30-foot power boat felt with just 10 people on it!  This is on top of almost all of them being seasick and vomiting non-stop.  I remember my parents telling us that they made the conscious decision to take the risk of our whole family dying on the South China Sea in exchange for a potentially better future for their kids.  I now understand why.  Honestly, after being here, I am reminded again of my deep gratitude for their courage, their choice and their sacrifice for their journey to get us to grow up in Canada ever since 1979.  I remember that the last time I had this exact same feeling was after my visit to Vietnam in 2007.  I wish my kids would someday have the desire to do a “dig root” trip, too.  Perhaps that’s when they will have a new definition of gratefulness.

On our way to see the pier, we got to see a city called Guangkou, a beautiful and clean city by the water. It is an incredibly quiet place.  It was interesting to be inside a so-called “ghost city,” which means it’s really dead, having tons of vacant or incomplete high rises. Developers and spectators were hoping to make money on these condos because of the proximity to the water, but there has been no further development, leaving the city like a museum of brick and stone.

To this day, people do not have access to FB, Twitter, Instagram, Netflix and Gmail because the communist government does not want the citizens to be free to have access to the outside world.  I am grateful that they do have WeChat because I will now be able to stay connected with a few of the cousins here after I leave.

And leave we will after being here for 6 days. We are ready to move to our next stop which is Hanoi, Vietnam…